December 04, 2013
I keep a running track of my breakout scan as a delicious bookmark list. You can take this list as a feed, directly follow it on delicious, or follow me on Twitter or Stocktwits to get the stocks as they are posted. I also maintain a tumblr featuring some of the charts of stocks on the list.

The list is a watchlist of opportunity for stocks making new highs on volume.  It's not meant as a direct 'buy' list, although some stocks may feature which offer low enough risk opportunity, to take the leap on the next open (at the right price).

I like to look back at stocks which triggered 2-3 weeks ago. I'm looking for stocks which have retained the bulk of their gains, but where the volatility has dropped - facilitating a low risk entry.  I also like stocks that don't violate the breakout gap (if any).

If we take the stocks which featured between Nov 13th - 20th we have the following list:

We can then collate this into a Watchlist. I do this for charts first, but it's also handy for building an alerts list in Zignals. 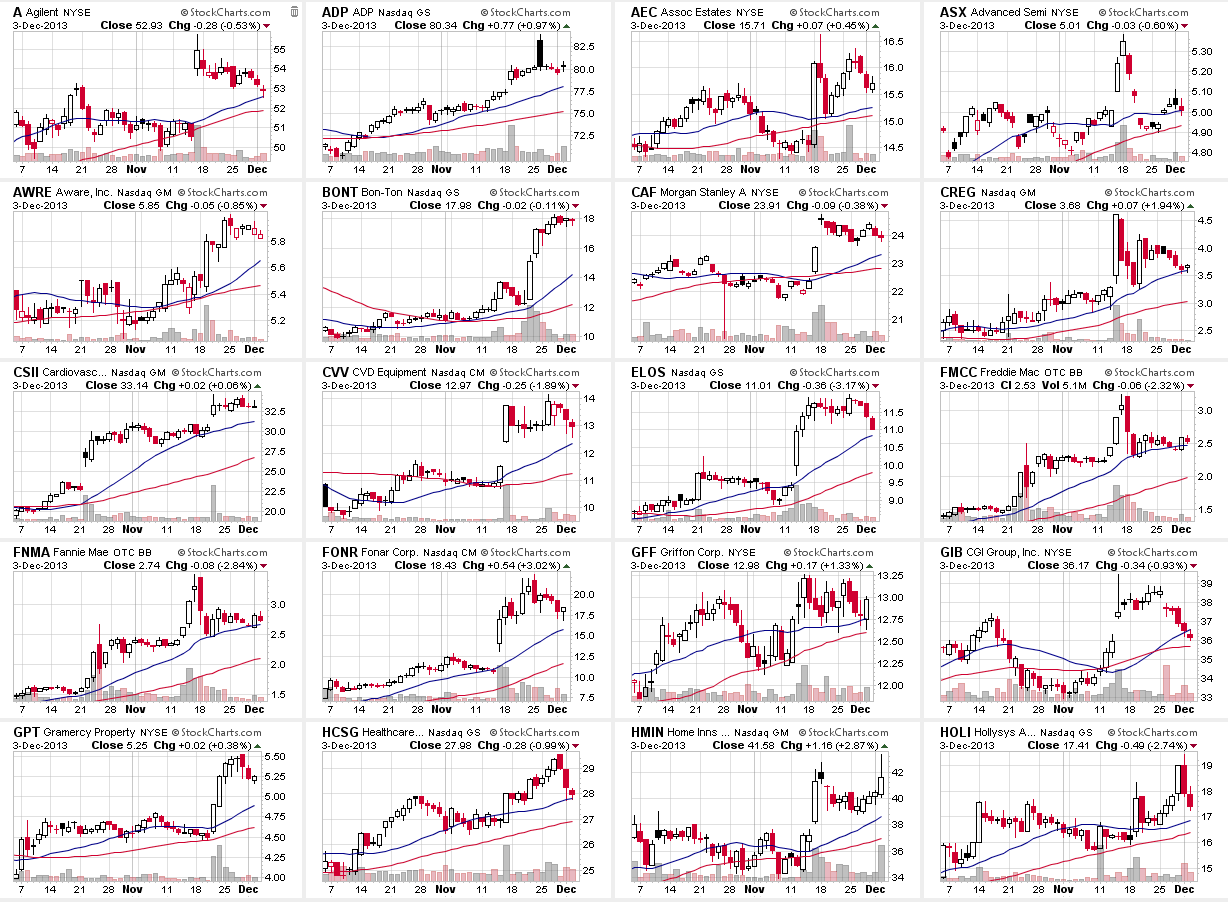 From there, it's a question of eyeballing opportunities.

At this point, you can use Zignals Stock Alerts (Zignals HTML5 is due to launch in February 2014, and will include Technical Alerts) to set the triggers for entry/stop protection, or eyeball on a chart during market hours for movers.

**Use all information provided at your own risk**

CAF: Stop on close below $23.50, although I would let an initial intraday break of $23.50 slide as there is likely to be lots of preset stops down here which could be knocked out for a cheap entry (both 20-day and 50-day MAs are below to provide support). A move above $24.50 offers a $26.50 initial target.

CSII: Moving up in gap-steps. Stops can go on loss of $32. A close above $34 should be enough to see this push higher. Target of $40. If there is a downside, it's that technicals suggest it may take longer - and base deeper - before moving higher. A move to close the gap would not be ideal, but GTC-Buy order fishers could try and net some in the low $31s, with a stop on break of $29. A Zignals alert is ideal for the latter set up.

CVV: Maybe still a little too volatile. It has shaped a $12.50-14.00 range which offers entry on break above, protective stop on drop below. However, past few days suggest it could venture into the gap and touch $11.50. Technicals also look to point to this.  If it dropped below $11.50 it would lose the base set-up, so consider $11.50 the last-chance saloon.

GFF:  This is the kind of stock buy-and-holders should like. It's not going to do much day-to-day, but over time it could reward you.  Wouldn't want to hold as a trade below $12.25, but if you were looking to accumulate over time, then this looks like a stock to consider.

HMIN: Much more of a trader's play. Great volume action. A solid looking support level at $38. Yesterday was a first attempt at getting past $42 since the original breakout trigger. Technicals in good shape.  The Santa Rally contingent could see joy here. Look for a move to $48.

KIRK:  A similar proposition to BONT. A near $9 move from $17s has tightened considerably. A pop above $26 could see a big short squeeze.  Potential long term buyers would want to see a new base form (of 2-3 months duration) to consolidate these big gains.  Day traders can be less picky on this.

MJN:  Lacks the buzz of a HMIN, but bidders seem keen to get this into the high $80s. It doesn't look like $82 is going to see a test, so stops could go on a loss of this price (which is also below the 20-day MA).  Big uptick in accumulation and bullish technicals. A sleeper bull play.

PEGA:  This is more an example as to what we want to see happen in the above. November's big gap consolidated into very tight action, before it took another push higher - taking the stock above the psychological $50 barrier.  This $50 zone is again getting tested, this time from the top, in tight action. If there is a concern, it's that a close below $50 would generate a 'bull trap'; effectively trapping the people who bought the push from $48 to $51.50. This kind of action is the downside risk to watch in any of the plays listed here. For a stock like PEGA, a 'bull trap' offers a swing traders short-play to fill the gap down at $42. Risk for a short is on a move above $51s. Such counter plays can be more attractive than the initial long play, and should be viewed as alternatives if the initial long position goes against you (and not try and convince yourself the long-side is the right-side to be on).

Even if your preference was to play the long-side, a scramble to the exit style sell off could see you pick up a bargain using GTC-buy orders/alerts. In PEGA's case, $40-42 should be significant support.

POZN: Another stock in the KIRK, HMIN set up. A big move higher, followed by a tight consolidation at the highs. Also lacks liquidity. A break above $8 sets up an opportunity for a measured move to $11. Technicals and volume firmly in the bulls camp.  Once it's looking like the stock will close above $8, stops could be adjusted to a loss of $7.75.

If all of this sounds like too much work, I also maintain a tumblr blog of stock charts I come across.

Please visit my parent blog, which keeps track as to what the broader market is doing, and identifies sectors which may be of interest to traders.

Popular posts from this blog 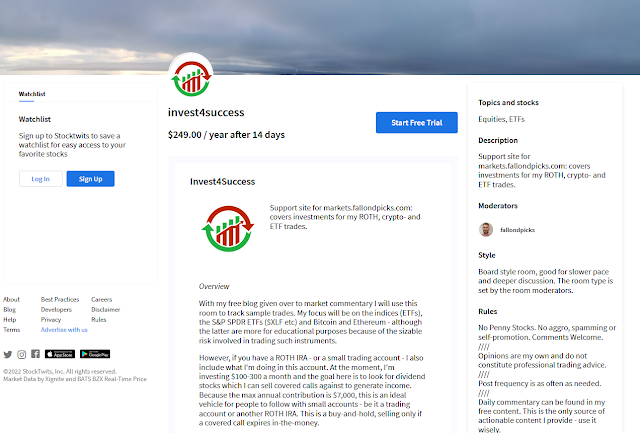 If, like me, you are not flush with cash to trade, I keep a Roth IRA which I use to snail-trade to wealth.  This account uses a small amount of cash allocated monthly from salary - along with blog income from Google Adsense - to invest gradually in dividend income stocks.  The reality is most people I have met through the years don't have the level of capital to trade successfully and would be better off using tax-efficient accounts, such as a Roth IRA, to accumulate wealth.  Invest4Success  is a Stocktwits Premium room that tracks the monthly investments I make into my Roth IRA. It's a back-to-basics approach that uses well-established names, a buy-and-hold strategy, and dividend re-investment to build value.  Eventually, I will use covered calls to generate additional income, but this is probably a year away.  If you are interested, it costs $249 a year, but you can get a 50% discount ($125/year) and a 14-day free trial with coupon code  fallondpicks. What is Invest4Success?
Read more

March 31, 2019
General Investment: Start with “Reminiscences of a Stock Operator”; paperback runs under $20 but the Kindle edition is selling for less than $2! It was first published in 1923 but it’s a good introduction to market psychology https://amzn.to/2FN1IAT Investors.com has a good newspaper for stock ideas (excluding the Editorials) which is supported by two books, “How to Make Money in Stocks” and “Become a Successful Investor”. The books run for under $20 on Kindle and are available here: https://amzn.to/2U6n2KE . If you want hard copies, then “Become a Successful Investor” should be bought first: https://amzn.to/2HOBujJ , then “How to Make Money in Stocks”: https://amzn.to/2UnN6Ab .   These books give a good introduction to the CANSLIM method, mixing fundamental and technical ideas and each book can be found for around $15 each, so they won’t break the bank. Technical Analysis I’m a big fan of John Murphy’s clear and concise writing. His book, “Technical Analysis of Fina
Read more